What type of player are you?

Memorise the Guitar Neck with the C Major Scale

The answer is the C Major Scale

But before I teach you how to play the C Major scale, and use it to memorise the whole guitar fretboard, let me quickly explain what it is and why it’s so beneficial to learn.

The C major scale is regarded by many musicians as the centre of the musical theory universe. It’s a scale which consists of only natural notes – C, D, E, F, G, A, B, C.

Quick note for real newbies: A scale is a series of notes played in a particular order, always finishing on the note you started on, but in a octave higher or lower. When I mentioned above that it consists of natural notes, I mean it doesn’t contain sharps (#) or flats (b).

Learning and memorising scales is a great way to really improve your guitar playing skills. Not only will you be able to start using them to solo, improvise, and make cool melodies, but you’re also training your ear to recognise different tonal patterns. Over time this skill will become paramount for creating your own music.

To help you quickly memorise and eventually master the whole guitar neck we are going to get you playing and flowing through the 5 C Major Scale positions. These 5 positions will take you through all of the natural notes from fret 1 all the way up to fret 12.

Luckily for us, the guitar is a pattern based instrument. When starting to practice the exercise below don’t worry about memorising the individual notes, focus on memorising the finger patterns for each scale position. Once you’ve memorised all the patterns, start playing the patterns with more intent on registering the position, and more importantly the sound of individual notes.

And if you can do this with the C Major Scale, you can actually play the major scale for every key using the exact same patterns.

Now that we know why the C Major Scale is so important and beneficial to guitar learning, it’s time to put our fingers to the fretboard and start playing.

Tip: for this one always ensure that you start with your second finger on the root note. 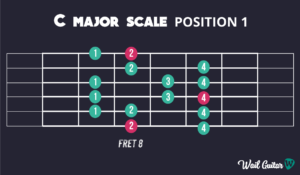 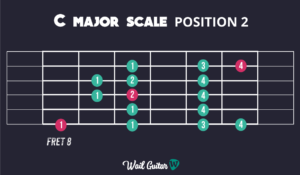 Tip: This position is only one octave, unlike the other four which are two octaves 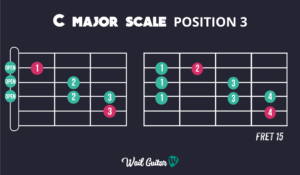 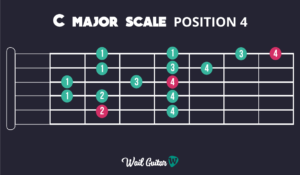 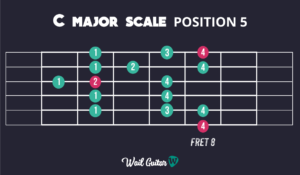 How to Pick Through the Scale

After you have memorised all of the different positions, you are going to start noticing where and how they overlap each other.

If you feel like you have all 5 positions down pat, start mixing them together. See how many different ways you can follow the C Major Scale from fret 1 all the way up to fret 12.

Make It a Daily Practice

There is no easy route to music mastery, but there are ways of getting there faster with deliberate practice. When starting to play the guitar a lot of people learn to play a song or two but never take a methodical approach as they would for something like working out and going to the gym. Much like working out, your advancement is something that you will notice daily with consistent practice.

Creating a daily practice routine for guitar playing is essential for accelerated guitar learning, and C Major Scale drills are a great daily practice. Set aside 10 minutes a day to go through just position 1 in the beginning. Once you are comfortable with position one, work through all positions, then start combining positions together.

If you are a total beginner, to avoid losing motivation when starting something new, experts suggest not getting too technical from the get go. People often let their frustration of not understanding something get the better of them and give up early.

We definitely don’t want to do that which is why we ask you to think of what you are about to learn in this article as a Pattern Memorisation exercise, and not worry too much about the notes related to these patterns.

Take Me To Church by Hozier

The Girl by City and Colour